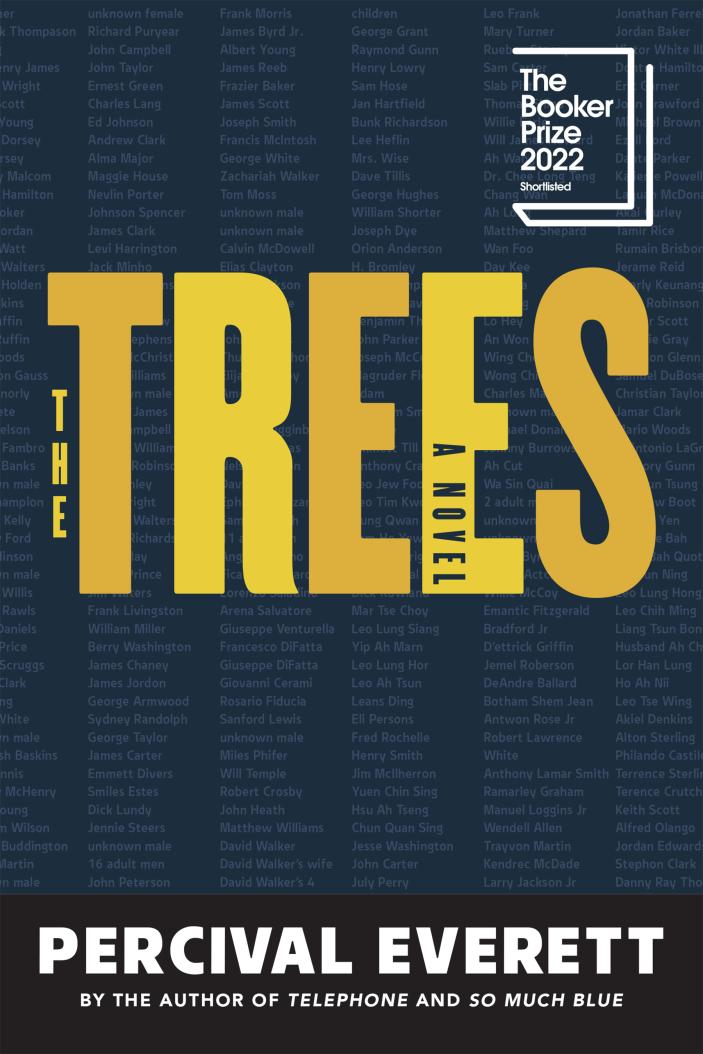 Percival Everett writes books that absolutely need to be written, and although my introduction to him was his dramatic novel So Much Blue, I somehow intuited the inside zaniness married to a skydiver’s sense of adventure and a philosopher’s wisdom and fearless vision of truth because my head exploded on first contact: “This is it!” screamed my hair follicles. “This is who I’ve been looking for.” And I hadn’t even read I Am Not Sidney Poitier, Glyph, or the incredibly prescient God’s Country, all of which made me scream with laughter and almost roll off my couch in joy and agony.

Reading The Trees after reading a lot of Everett’s 30+ books allows you to secretly smack your lips, knowing some of the precursors to this new one. Almost immediately I thought I knew what was coming because I’d read American Desert, and the ending to one of my favorite Everett books, the aforementioned God’s Country, has echoes of this new book, and almost seems to demand that it happen eventually. And now it’s here.

To compare Everett’s work to anybody else’s is pointless. So instead, here’s a scene that conveys what I love here and in his earlier funny novels (no setup necessary):

The Doctor Reverend Cad Fondle was sitting in his living room with his wife, Fancel. Fancel was a big woman, big enough that she hardly ever moved from her corduroy recliner, which was stuck in recline. There was a half a meat lover’s pizza and two beers on the foldout tray between her recliner and her husband’s. They were watching television, switching back and forth between Fox News and professional wrestling.

“They’s right,” Fancel said. “That Obamacare don’t work worth a hill of puppy shit. We done bought in, causin’ we had to, and I ain’t lost nary a pound.”

Fondle took long pull on his beer. “Well, the country’s done with that experiment. Smart-ass uppity sumbitch. You know he thinks he’s better’n us.”

“That Hannity is cute,” Fancel said. “If I could get my hand anywhere near my vajayjay, I’d rub me one out just watchin’ him.”

“How did the cross burning go the other night?” Fancel asked.

“It’s called a lightin’, a cross lightin’. It ain’t right to burn a symbol of our Lawd Jesus H. Christ. I would think you knowed that by now.”

Fancel sighed. “What’s the H for?”

“What?” “The H in Jesus H. Christ, what’s it for?” She picked up some pepperoni from a crease in her house dress.

Fondle paused to regard her with his head cocked. “Why, it stands for, um, heaven, that’s right.”

“What would make sense to you?” Fondle asked.

“It’s the name of a place, so it’s a name. In fact, the place is named after our Lord,” Fondle said, his eyes narrowed.

“Why ain’t the place just called Jesus or Jesusburg?”

This is a hilarious and devastating book that in some sense has been 400+ years in the making, and finally, finally it is here, courtesy of Mr. Everett.

In The Trees Percival Everett chooses to rotate all his comedy and tragedy cylinders at the same time. And he’s so good, using all or part of what he’s got can be a choice. And in 2021, he has chosen to give us everything he’s got. The United States needs this book. The world needs this book.

What Percival Everett has written about, an inevitable rising up and destruction by those who have suffered without justice, is and has been in the air for years. And writers pick these things up. I’ve written an as-yet unpublished novel which is my take. And recently I’ve read others: The Mermaid of Black Conch by Monique Roffey, and nonfiction The Reckoning: Our Nation’s Trauma and Finding a Way to Heal by Mary Trump. And I’m sure there are many more books coming. The muses are screaming and the poets and writers are listening—following their “orders from headquarters” and sounding the alarm.