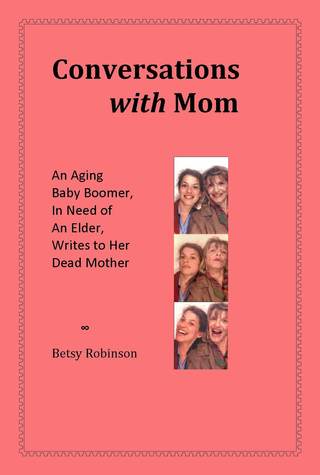 Hard copy sold exclusively at
www.BetsyRobinson-writer.com.
All sales are final.

For orders outside the USA, email your address for a price to
Betsy@BetsyRobinson-writer.com
(Then pay through your PayPal account or by check--I'll provide an address.)

If you're
☻ PayPal phobic, or
☻ want to order 50 or more
discounted copies for resale
email Betsy@BetsyRobinson-writer.com for an address to pay by check.

FOR USA ORDERS ONLY.

• If you use a middle initial, do NOT put a period after it in the PayPal order form. No periods, period. Just don't use them.

• If you don't receive a confirmation from PayPal, your order has not gone through. They haven't charged you. Something went wrong. Please try again. (And don't use periods.)

Praise for
Conversations with Mom

Conversations with Mom brought me to my knees . . . touching, hysterically funny and oh so wise . . . With whimsy, wisdom and wild abandon, we fall in love . . . A book that we all need, for we all need mentors and moms as we enter that age of the elder ourselves, and simply don't know what to do.

I loved the authenticity in every page, the way humor was so well balanced with sadness, guilt and longing. The ending in particular made me both cry and smile. Highly recommended to anyone looking to explore themselves at deeper levels through an intelligent, witty and really great read.
read complete review at Alaska Wellness magazine

…distinctively feisty voice … We should all have such mothers.
Chronogram

Betsy took me on a journey with wit and insight, questioning each step of the way. I was compelled to join her in her imaginative but humble search for understanding of our humanness and frailty. Her humor helped me to keep going and shrug off any resistance or weariness on the climb. [Susan Trott’s] The Holy Man would have recognized her, I'm sure, and asked her to tea.
Melodie Somers, Coach: Theatre & Psychoanalysis

Funny, engaging, clever, insightful, and healing. Betsy and her mom interact with a unique brand of love and humor while discussing life, death, and everything in-between. Although the details are personal, the basic issues are familiar to everyone. Easy to read and easy to cherish, this is an eloquent book that speaks to the deepest levels of moving through family dysfunction and opening
to love.
Dawn Baumann Brunke, Author,
Animal Voices and other books

This little book is a treasure. There are nuggets of wisdom in these pages that had me laughing, and at times almost crying, as I saw reflections of my own experience, and found new ways to view them. Whatever your own mother-daughter relationship is or was, this very personal story will open your eyes and your heart in many ways.
Melinda Hopkins, Life Coach

Conversations with Mom courageously challenges the pathos and convictions of an inner voice familiar to us all, and comes out on top. Taking nothing for granted, with humor and insight, the author explores the questions that make a thinking person tick. I enjoyed reading this book!
Gil Hedley, Ph.D., Integral Anatomy Productions, LLC: Dedicated to exploring inner space.

I started reading at breakfast time and couldn't stop. I felt irritated that I had to stop for a bit to get ready for my regular tennis game (which I love). But I did finish it before my tennis partner arrived. What a riot and what wisdom!!! Your conversations were real, wise, funny and, as a pastor I found them so theologically sound. I just bought three more books to share with friends and wished I had the $ to buy more—but I'll be recommending it to all of my friends.
Ermalou Roller, pastor, author of
On Thundering Wings: Homosexuality, Love and the Church on Trial

A Letters to a Young Poet for Today 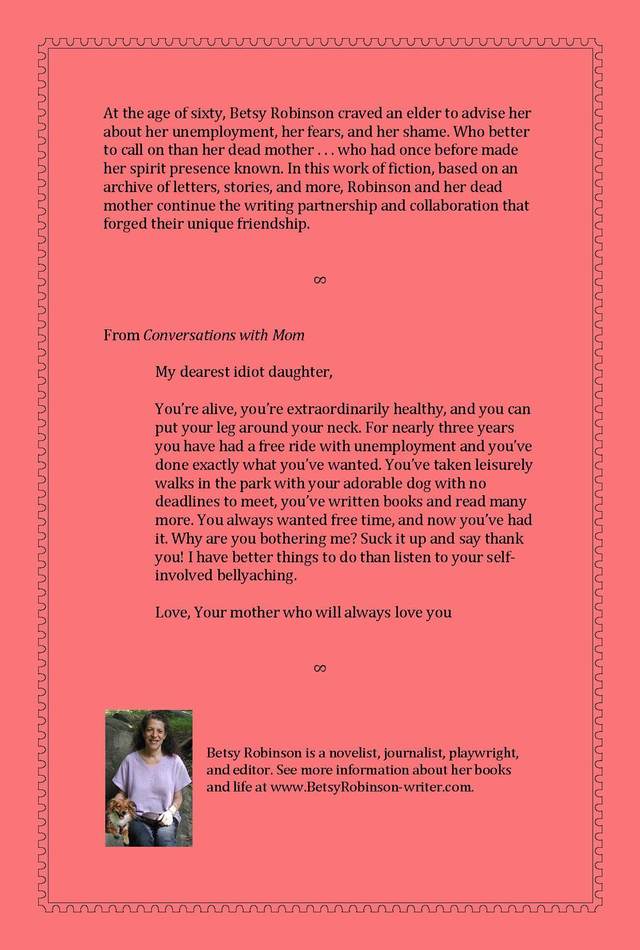 A modern Letters to a Young Poet where the Poet is age sixty
and the sage, Rilke, is a dead wild woman who came of age in the 1940s.

Read my book blog about the book.

About Conversations with Mom
This epistolary exchange between unemployed writer/editor/former actress Betsy Robinson and her dead mother begins where the website story Marbles ends.


Q: Is it channeled?

Betsy Robinson: No. No more than any other writing is. I have no idea how writing happens. You sit, you stare into space for long periods of time, you lie on your couch, you go to the bathroom and drink lots of coffee, and suddenly there’s a surge. While it’s happening, you sweat, you feel excited, and then it’s over. And then comes the rewriting. And more rewriting. And more. You get the picture. Where channeling comes in, or if there even is such a thing, I have no idea.

Q: So what is an “epistolary work of fiction”? Did you make that up?

Betsy Robinson: According to some sources, the epistolary novel was the first novel. It became popular in the eighteenth century and was a book that comprised the letters of one, two, or three or more people. My book is not really a novel, so I call it a “work of fiction.” As the back cover says, I used real source material from diaries, a scrapbook, and documents that either I or my mother had saved. I also made up a lot of stuff and edited and rewrote whenever I felt like it.

One of my favorite books was the epistolary work Letters to a Young Poet by Rainer Maria Rilke which I carried with me like a talisman when I was in my twenties. I gave it away sometimes, too, and kept buying new copies. My present copy fell out my window one night and lay in the snow in my downstairs neighbor’s backyard. It is in such bad shape I could never give it away, so I still have it.

Another of my favorite books is the Bhagavad Gita, a dialog between reluctant warrior Arjuna and the god Krishna, who explains why Arjuna should get his chariot moving and, for goodness sake, fight.

Conversations with Mom is nothing like Letters to a Young Poet or the Bhagavad Gita. Except if you imagine Rilke/Krishna as a wild, terrified, beautiful woman who came of age in the forties only to become a drunk and then a sober, somewhat crazy lioness in the seventies, who joined forces with a poet/Arjuna who happened to be her daughter (moi), a wild, terrified, uniquely attractive young woman who came of age in the seventies, worked at a lot of jobs, then got laid off in the Great Recession, and at the age of sixty, wondered how the hell she was going to exist for the rest of her hopefully long life.


Q: Who’d you write this book for and why would people like it?

Conversations with Mom offers some wisdom, I hope—to people of every age, but particularly to those of us who expect that we should be mentors or crones or at least grown-ups by the time we are on the cusp of being really old. It's a book for people who enjoy introspection and prefer difficult truths to shallow explanations. It also chronicles the rather unique and funny relationship I had with my mother as well as my fun dysfunctional family history. So in that way, it’s a quasi-fictional-epistolary memoir. (Say that ten times fast.)

EXCERPTS
From the chapter “Gratitude”:

From the chapter “Worthiness”:

I wish I could have taught you to feel worthy, but I didn’t have it in me to teach. I cannot teach it to you now. Finding that is your job. But I can tell you that there are no accidents. It is not a mistake that you are alive and well. Nor is it luck. Can you believe that? Can you believe that an incomprehensible matrix of forces has created the fact that you are alive and well, and your own actions are a part of that, but hardly all? Can you believe that something that is you but is much more than you could be intelligent and compassionate and intentionally kind? Why is it so for you and not those who suffer unspeakable injustices? That I can’t answer. Some people say it’s karma from other lives, some believe it’s “God’s will.” Some try to give the suffering purpose in order to tell a story about it that makes human sense. I can do none of those things.

All I can tell you is that you are who you are because it is right. You have the life you have because you are part of something much bigger than you can imagine, and the part you play requires the life you have. It has nothing to do with being worthy or unworthy. It simply is. My life simply was. I did the best I could. You are doing the same, are you not? Let that be enough.

[Read this entire excerpt at Daily Om. And another excerpt on "Confusion & Addiction" at Downright Fiction.]

Return to top of page