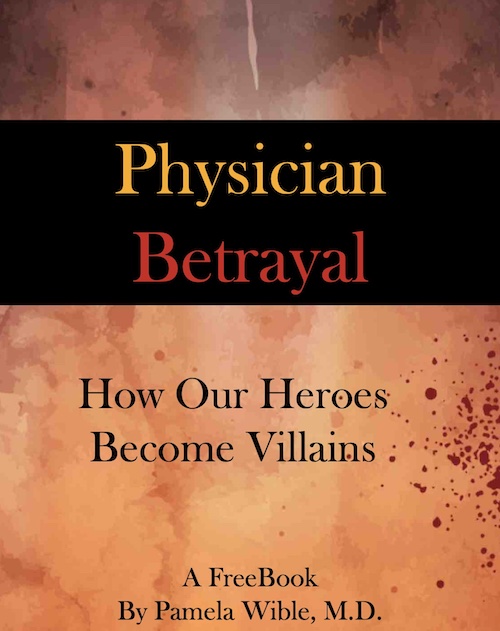 I wish everyone would read this short (43 pages), free, absolutely remarkable book (some memoir, a ton of facts, shocking and readable) by Pamela Wible, M.D.

If you want to know why our medical system . . . and the whole culture . . . is so screwed up, read this. It’s written for doctors and med students about their training, but you can effortlessly extrapolate to the problem that becomes a cancer when people ignore their inner moral compass because of peer pressure or for some outer gain.

There are some people who don’t know or care what’s right or wrong but that is not the majority of us. However when people en masse ignore what they know, we’ve got the mess we are in. The website for downloading the free pdf is here: IdealMedicalCare.org

The Precursor to Hilarity

To set up the bit that follows this one, I thought I'd mention this just-published NPR story about insane but normal medical charges. This REALLY happens.

The more upset I am, the funnier I write. This just-published piece of satirical hilarity was borne of what I came to realize was a completely unnecessary breast biopsy on the day of Superstorm Sandy, on the eve of Obama's second election in 2012. On that day I experienced enormous relief that the test result was benign. But then the bills started coming: from doctors who had never identified themselves as out-of-network, and charges I never could have anticipated for a 15-minute needle stick—charges that were actually inflated due to the fact that my catastrophic medical coverage which did not cover them had higher "allowable fees" than the hospital would have charged if I'd had no insurance.

I'm happy to have finally found a home for this piece in a new online journal called Abandon. Read the whole thing at :

There is a lot of rot in our human systems when we destroy one another and the planet. If I dwell on it too much, I become a floppy, exhausted lump of flesh who can't get off my couch. But when I manage to sit upright, I can remember that the solution to most every problem is first to see it, so we can then do something about it.