Understanding the Joy of Lying

I was an actor in my twenties and was approaching a building where I was in rehearsal for a children's play. As I neared the entrance to the building, another member of the cast, a guy in his twenties, glommed onto me. "Let's go in together," he said, smiling.

Thinking nothing of it, I walked through the front door with him, and as we approached our director standing in the hallway, my now-escort grinned broadly and announced to our boss, "We've been rehearsing together."

I was too stunned to correct him. A few steps later, as we entered the theater I recovered my voice. "Why did you say that?" I gasped.

He smiled, shrugged, and went on his way.

This was my first personal encounter with a pathological liar. I've since met and had to negotiate with others. And the thing I've learned is that they lie because they can. They have no inner conscience scolding them, no allegiance to truth, absolutely no reason at all to adhere to truth. They lie for fun, for self-aggrandizement, for some twisted sense of power or for dominance. They lie because they have no sense of consequences. Because they feel no shame if they are confronted with their lies. They shrug, laugh, smile. "So what?" they'll even say, if pressed.

People with strong ethics cannot understand this. But people with ethics can actually have their ethical sense so eroded by the joy of lying (yes, there is joy once you assume no consequences) that they can lose all inhabitions about doing it.

Trump taught the Republican party leaders the joy of lying. Joy and the freedom of this exhilarating release from truth spreads to others who would normally declare that truth matters. If they believe that their freedom is in danger and the liars are the truthtellers, this is an obscenely easy conversion for pathological liars to engender.

This is how our current Republican leadership can one minute say there was election fraud and the next, say the opposite.

So this is where we are.

Liz Cheney is one of the rare people who will not be swayed by the herd, no matter what the imagined benefits. I do not agree with her on most policies, but I respect her backbone, patriotism, and willingness to do what's uncomfortable.

It is comfortable to look at the side you disagree with and condemn them as liars. But cultural transformation only happens when we all are willing to look at ourselves—at our own illusions and fears and subsequent lies or impulsive actions.

I'm a liberal, progressive person who believes in freedom of expression, but I find it horrifying that like-minded people are currently threatening to leave Simon & Schuster if the company publishes a book by Mike Pence. These big-time writers desire a "safe" place for a diverse workforce and have stated that nobody in the Trump administration should be published. Huh? They want to censor expression by people who have not been convicted of a crime. (This is vastly different from not giving a social media megaphone to somebody calling for violence.) They want to deny the rights of people to write books, distrusting the publishing process of fact-checking that would have to happen, and stifling voices of people they (and I) disagree with.

When Bob Woodward shared his tapes of Trump saying that he knew the coronavirus was airborne during his interviews for Woodward's book Rage, people were quick to eviscerate Woodward for keeping this a secret. Why? Fear and fury. They didn't even consider the truth that an ethical journalist would have had no way to verify that this was fact at the time the interviews were done. Would people have had Woodward publish something that may have been just another lie? Apparently, yes.

Anybody who doesn't take the time to understand how things really work—for instance, that publishers regularly discontinue certain books and making one Dr. Seuss book out-of-print because it has racist images is not canceling Dr. Seuss—are lying by ignoring facts and details.

We do this when we are afraid. And the only way to stop doing it, let alone hope somebody else will stop doing it, is to realize this is the herd mentality borne in our species. So we must think, and when it is merited, abort the impulse to stampede, admitting that we, too, were about to act without discernment because of our fear. 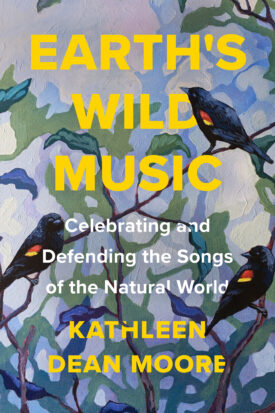 I'm reading a wonderful book for the second time: Earth's Wild Music: Celebrating and Defending the Songs of the Natural World by Kathleen Dean Moore. The following quote refers to our ecological landscape, but it is appropriate for the cultural one as well, and makes me feel a little better about the current insanity.

Disturbance kicks the world into motion. What has been stagnant is booted into new life. Mature stands of fir and pine are replaced by meadows and thickets and creek bottoms. What has been simple is now complex. What had been monochrome forest is now a hillside of purple lupine. What had been silent is noisy with chatter and song.

I was not ready for this. It unnerved me to be confused about the difference between destruction and creation. Destruction, creation, catastrophe, renewal, sorrow, and joy are merely human ways of seeing, human projections onto the landscape, the ecologist insisted. What is real, he said, is change. What is necessary, he said, is change. Suddenly. there are new niches, new places to grow and flourish. (174)