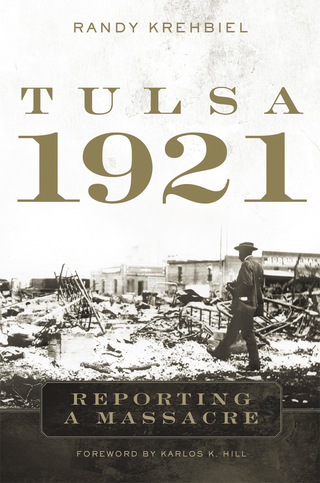 Reading Tulsa 1921 is a little like being in the middle of a mob and hearing all the hundred-year-old voices at once. It is an important record of absolutely everything leading up to, during, and after the mass killing of Black people in and the destruction of the Greenwood district, the Black Wall Street section, of Tulsa, Oklahoma on May 31–June 1, 1921—a history that was never recorded in Oklahoma school books and certainly did not make its way into my white high school history classes in suburban New York in the 1960s. But unless you are digging for facts, it is a difficult book to follow as it is really more like investigative notes, leaving nothing out. Often the reporting is recounting what is essentially a game of "Telephone" where facts are skewed or made up out of whole cloth or maybe not, and every single one of them is relayed for examination. According to author journalist Randy Krehbiel, some truths will never be known, especially about the incident that led to this abomination.

I was willing and eager to dig through this book because my mother was born in Tulsa in 1921, and although she never spoke about it, or is it possible she didn't know?—I'll never know—I suspect that whatever happened exploded into our family with such force that, unbeknownst to me, I've suffered the reverberations in my own history, due to my mother's trauma ... due to her parents' trauma … due to her Jewish merchant father's decision to inexplicably flee (my word, not hers—she never explained it and I don't know exactly when he fled, if he did indeed flee) Tulsa after she was born, four months after the massacre. The family subsequently moved so often that my mother suffered a lifelong phobia about being lost.

I'm glad this record exists. It made the people and the place real for me and I did pick up bits of history that may add to my personal understanding: the fact that the riot and destruction began in the white business district (where my grandfather's jewelry store probably was), although this pales in comparison to what followed; and the fact that at least two businesses mentioned in Greenwood (a movie theater and a grocery) had white owners, so perhaps there were others. But all this is tangential to what we need to know to understand what happened.

The reverberations of the Tulsa massacre in our present culture are painfully obvious. A Black man was accused of an assault (that may or may not have happened) by a white teenager and then all hell broke loose. Even without television and internet, rumors spread like a virus, morphing into hysterical rage founded in hysterical fear. Because white people had regularly killed Black people with impunity, they (whites) assumed they would be attacked back. And because Black people had been killed with impunity by white people, Black people assumed it was about to happen again to the jailed Black man. The only clear thing is that racism fueled one of the ugliest events of mass killing and destruction—complete with machine gunfire and an aerial attack—in our American history. And how quickly this was erased from taught history is an illumination of systemic (educational) racism that cannot be denied.

History has been repeating itself and the only mitigating circumstance in 2021 is cell phone video. It caught a white woman who made herself hysterical out of her denied racism as she accused a Black bird watcher of something he didn't do and had no intention of doing. And it caught a white police officer slowly murdering a disabled Black man as he pled for his life.

Sensational lies and the resultant fear morphed into violence then in Tulsa and now in Washington, D.C. One report about the Tulsa massacre accuses a newspaper of a lie: the commander of the Oklahoma National Guard, General Charles Barrett, is quoted as saying, "The bloody clash between the races had its beginning in a little spat and scuffle between a young negro janitor and white girl elevator operator and the fantastic write-up of the incident in a sensation-seeking newspaper. (90)" But then again there were so many different stories about who was to blame, the truth never had a chance. And we all know about the Big Lie that erupted in violence on January 6, 2021.

One parallel (between the events of 1921 and 2021) that I sense but cannot quite parse is the participation of military, ex-military, and law enforcement officers in both imbroglios: One reason that Greenwood was so extraordinary was that many of the Black business owners were ex-military. They came home from fighting in Europe with a new sense of dignity, capability, and possibility. Greenwood was such a draw for Black people from all over because of its community of cooperation that nurtured everybody and resulted in financial success.

Many of the white men who attacked Greenwood were also ex-military and police. There are reports in this book about resentment from white soldiers that Blacks were allowed into the military and further contempt for them when they returned as veterans with rights and benefits.

And the January 6, 2021 attack on our Capitol building—carried out by so many ex-military? I cannot articulate the connections but I sense them: something about a military conviction of rightness and commitment to complete a mission going haywire in both events due to the fact that both missions were based on lies?

First Nations people talk about making decisions based on consequences seven generations into the future. Why do white men fear this wise culture so much that they systematically tried to wipe it out way beyond seven generations? Perhaps because if they fully felt the ramifications of their actions, white people would have to make different decisions and acknowledge the criminality of the choices they make.

If what I believe happened in my family—that, as the world around her exploded, my five-month-pregnant grandmother flooded with stress hormone that, of course, went to my mother in utero*; that my grandfather lost his business and, in a traumatic fury, fled Tulsa, unable to settle thereafter, the consequence of which was a legacy of trauma to my mother, who was almost unable to have an adventure because she literally trembled from head to toe in terror of being as lost as she'd been as a child, with no sense of home or how to get there—if this was the consequence to a white Jewish family, resulting in craziness and anger and hypervigilant stress that had repercussions to her and future generations, with no knowledge of its roots, then I can testify to the fact that choices and decisions and lies have an impact that travels like the concentric circles of a boulder thrown into water. Let us stop this madness and commit to truth.

Postscript: The case that had evoked the Tulsa massacre—a 16-year-old white girl's accusation of a Black janitor—was eventually dismissed when the white girl requested he not be prosecuted.

*I interviewed a researcher of the transgenerational transmission of trauma to offspring in this article: https://www.rewireme.com/insight/experiences-change-markers/. Briefly, mothers who were pregnant and traumatized during 9/11 and the offspring of Holocaust survivors were studied. It is incontrovertible that trauma affects DNA markers that are transmitted to offspring and will continue on down through generations unless somebody does the work to reverse things.

I recommend watching the full hearing, including a second panel of advocates for the survivor centenarians. This longer video has gaps before and between first and second panels, so it's not as long as it appears. The second panel features one of the most inspiring attorneys I've ever heard--his warmth and protection of his survivor clients is palpable while they are testifying. I wish the whole country would watch this: Tulsa Race Massacre congressional testimony.

Thank you, Betsy. I hadn't known about this Massacre. The historical significance is profound for our family.

Thanks so much for this wonderful review. I doubt I will read the book, although this sad chapter on American history I find of particular interest. Your review here is thoughtful, insightful, concise and well written. A+ !