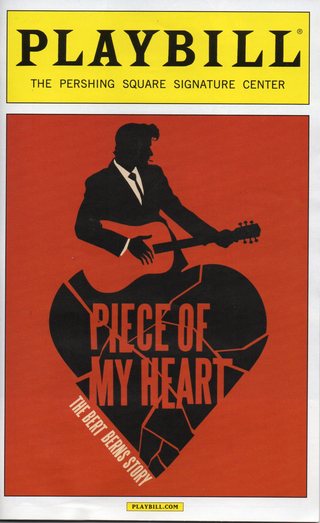 It felt auspicious that I was seeing this musical in the midst of my work toward the February publication of my dead mother's 1957 novel, The Trouble with the Truth, as well as the September launch of my own novel The Last Will & Testament of Zelda McFigg.

My mother, Edna Robinson, died in 1990, and the one thing she ever admitted wanting was "a book with my name on it." In the unedited version of The Trouble with the Truth, a Depression era coming-of-age story, protagonist Lucresse Briard rarely was forthright about her longing to be known, but it was there and so critical to the emotional life of the story, that as my mother's posthumous editor and book doctor, I felt confident that I was fulfilling her vision when I exposed it and connected a through-line to the end of the story.

By deduction, it is obvious that the writers of these stories—Edna Robinson and Betsy Robinson—have an issue with feeling invisible. Mother Edna felt invisible because she could not see herself—her incredible talent and courage as well as all the fear and a rage that she was too ashamed to admit to even herself. And if a person cannot see herself, how on earth can she see her children? Hence, child me, feeling unseen by her, continued the legacy into adulthood.

However, since I have devoted my mature years to deconstructing my blindness and developing sight, I think I now see well enough to witness how utterly common is a belief in our own invisibility. Why else would a dead person's work legacy be so important? Why else would a whole culture crave fame for fame's sake, take their worth by how many "likes" they receive on Facebook, be so completely image-focused that if they are not posting or receiving attention from other people's posts and emails, they feel as if they do not exist?

For this reason, Piece of My Heart is not only wonderful entertainment, but it is an incredibly timely musical. The Trouble with the Truth, a 1930s story written in 1957, could not be a more current masterpiece. (I can say that because I'm the editor, not the writer.) And The Last Will & Testament of Zelda McFigg? You will have to judge for yourself whether you can identify with a somewhat grotesque lady, who so resents her invisibility that she resorts to actions far more outlandish and unethical than any of "us" good and well-meaning visible people could even imagine. Right?

It's my belief that only by acknowledging our belief in our invisibility, which really is just another word for the aloneness of the human condition, can we become visible to ourselves. And once visible, if we can tolerate the sadness, it will give way to joy.

“The mass of men lead lives of quiet desperation. What is called resignation is confirmed desperation. From the desperate city you go into the desperate country, and have to console yourself with the bravery of minks and muskrats. A stereotyped but unconscious despair is concealed even under what are called the games and amusements of mankind. There is no play in them, for this comes after work. But it is a characteristic of wisdom not to do desperate things.”

Please friend me on my Goodreads Author Page. And check out the great reviews for The Last Will & Testament of Zelda McFigg and The Trouble with the Truth.