Bad Stories: What the Hell Just Happened to Our Country by Steve Almond Offers Clarity 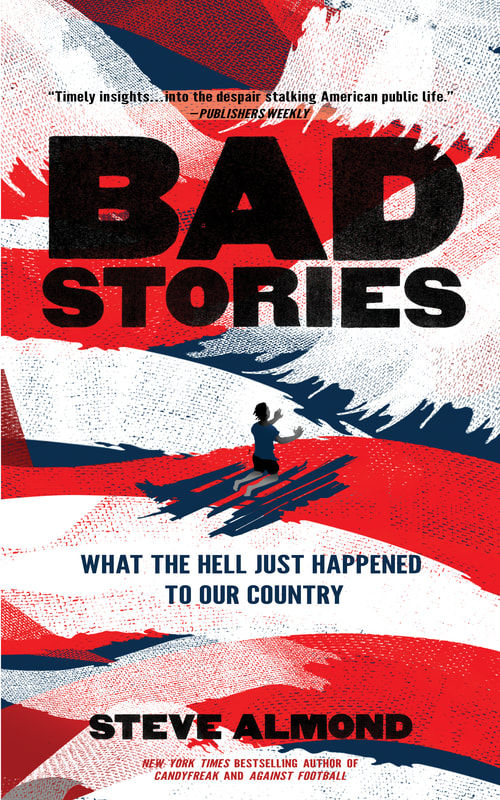 This book is staggeringly good. I was familiar with Steve Almond from his short stories, but this is straight journalism at its best (which he teaches at Harvard). (It is clear from Almond's thought processes and messages to students, presented in this volume, that he is a great teacher and seasoned journalist.)

In reviewing, there is a tendency to break down books about politics into bullet-point messages, and I hesitate to do that because it would misrepresent Bad Stories as something much smaller than it is.

So what is it?

Because of Almond's conversational writing style, it is easily readable and offers up documented mind-blowing insights like hors d'oeuvres. Hence, Bad Stories is a huge, readable 237-page revelation of profound insights gleaned from connecting dots that we-the-people largely prefer not to see.

At its root is the premise that if we tell ourselves, and believe, bad stories, we will inevitably live them—belief creates reality, or more accurately, those beliefs we don't fully acknowledge, examine, and understand create unconscious actions that create reality. This is not a new idea, but Almond makes it new by spotlighting our shadow (our denied self, per Jung) through the bad stories that we believe so fervently that they have resulted in our current predictable situation—starting with our belief that we are a country founded on the notion that all people are created equal. (That took me-the-reader instantly into the eye of the upset and my body went into such an extreme reaction, I had to put the book down and go for a walk in nature to recover.)

In each chapter, Almond relates stories—from Moby-Dick, to tales of the reasons for the Electoral College, to a magical liberal belief that court jesters like Jon Stewart and Stephen Colbert can rescue us (even as they erode our urgency to react seriously). The stories vibrate—and sometimes electrocute the unsuspecting reader—with upsetting truth because they are not relegated to Republican or Democratic or Independent or anarchistic belief. They are we-the-people's stories (and although it seems obvious, I'll add that the Fourth Estate, which is fiercely examined, is a component of we-the-people). We own these stories and we created our present environment out of them. They are stories written by all of us, but the foundational one is the creation of white American society—the story of people who founded a country via genocide, enslaved people, knew we were doing the wrong thing but justified it, and now function with a legacy of subconscious fear of retribution from "dark people," resulting in the present paranoia and nationalism. (For a look at the repercussions of this bad story—enduring trauma—from the side of those who were victimized, see Monnica Williams's article.) We are a country who enjoys not knowing; clings to our "unserious" right not to know or care or even vote; deeply enjoys fear, loathing, and anger at "other;" unknowingly cherishes the negative pleasure of being helpless and will twist it into a pretzel-shaped projection if confronted by contradiction; and will defend our beliefs, condemning those who do not agree as "the enemy," because we believe our life depends on it.

This is a brilliant and deeply upsetting book; the antidote for a denied shadow is illumination, and the shock at seeing a denied part of ourselves can be an identity crisis. But out of that crisis can arise the possibility of "dream[ing] up stories that offer a vision of the American spirit as one of kindness and decency . . . "

For the brave and curious, here is the book's website: Bad Stories. It launches April 1, 2018, from Red Hen Press, which was kind enough to send me a review copy.
* * *
A contemplation, several days after finishing this book:

I wish everybody would read Bad Stories, but that is a fantasy. My wish stems from the book's "slow-bomb clarity" exploding in my head, concurrent with learning that the Parkland students, survivors of the mass shooting at their high school, essentially trained rigorously for their present activism by researching, amassing a database of facts, and debating both sides of gun control as part of a Broward County debate program, one of the largest in the country, "that teaches extemporaneous speaking from an early age." What's happening is not magic. It is the product of methodical work colliding with horrible trauma.

The revelations of Bad Stories are our secret addictions to feeling angry, scared, helpless, or removed from the current mess. Our addiction to the ENTERTAINMENT of it all. The easiest way to evolve out of that is (1) to acknowledge it, then (2) train, as these students did, and therefore be able to (3) act.

I am a writer who is uncomfortable confronting people about their beliefs, so I would hate knocking on doors to try to persuade people to vote for a certain candidate. But I can write. So I am writing this little contemplation. And I'll look for other venues where writing can be helpful. (Can you guess what my addiction has been? Helplessness.)

If you are out-of-your-mind angry, maybe use that energy to organize people.

If you are crazy scared, maybe join some organization (there are certainly enough of them) being organized by more energetic, confrontational folks, and follow.

Yelling on Facebook or Twitter is no more an action than thoughts and prayers are. Getting out the vote is.