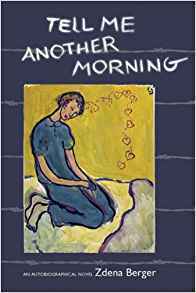 The first thing I ever wrote and published was a review of Tell Me Another Morning by Zdena Berger. I found this autobiographical Holocaust novel while browsing in my local public library when I was 13 or 16; the time is hazy. I would hang out in the quiet of this small-town oasis, explore, and for a little while feel like who I really was. There was a newsletter booklet on the librarian's desk and it said they'd publish reviews, so I wrote one. Although I read Tell Me Another Morning 53 or 50 years ago, I still remember it. It was a story about surviving by listening to stories.

I was catapulted into this memory by yesterday's The Hill report:

As National Library Week begins April 9, the Trump administration and Republican Party have launched an unprecedented attack on the institution by submitting a zero budget request for the Institute for Library and Museum Services.

Libraries are important and I am appalled that the government of the country that people run to, the "land of the free," would defund them. Libraries are part of our national infrastructure. They allow people who have nothing to have access to everything. (Just take a look at this list of a few famous people, including Lincoln, who educated themselves with merely a library card.) Libraries allow those who are interested to learn the horrors of not resisting when humans act inhumanly (Yes, Sean Spicer, Hitler really did use chemical weapons on his people).

I am 66 years old, and I still remember the lessons of this book: Compassion is something to fight for. When a society becomes inhumane, when brutality becomes the norm, one must resist. We can survive through stories; we just need access to the right ones.

“A public library is the most democratic thing in the world. What can be found there has undone dictators and tyrants: demagogues can persecute writers and tell them what to write as much as they like, but they cannot vanish what has been written in the past, though they try often enough. People who love literature have at least part of their minds immune from indoctrination. If you read, you can learn to think for yourself.”
--Doris Lessing