A People's History of the United States by Howard Zinn 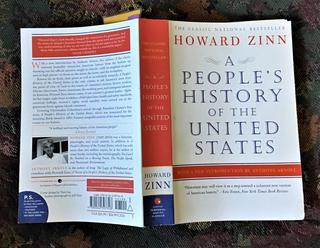 A partial journal of reading this very long book

I am very late to this classic. The first paragraph landed so hard I have to stop reading and do errands to let this process through my body. Here's what did it—from Columbus's log when he was met with an extraordinary welcome by Arawak people who inhabited the Bahamas:

"They ... brought us parrots and balls of cotton and spears and many other things, which they exchanged for the glass beads and hawks' bells. They willingly traded everything they owned ... They were well-built, with good bodies and handsome features ... They do not bear arms, and do not know them, for I showed them a sword, they took it by the edge and cut themselves out of ignorance. They have no iron. Their spears are made of cane. ... They would make fine servants. ... With fifty men we could subjugate them all and make them do whatever we want."

The legacy of this mindset is nauseating. The misinterpretation of love, altruism, and gifts to honor visitors, from a Western perspective of power and possessions and the arrogant belief that any culture that is different from theirs is necessarily ignorant or stupid rather than perhaps more evolved and connected to oneness? ... I do not know where to begin. I have been reading and editing Native material the last few months, and seeing and feeling the roots of the pain leaves me moaning in my own agony. I will absorb this book as fast I'm capable.

Only 2 chapters in and I've learned that in 1619 settlers in Virginia were so desperate for food they resorted to cannibalism. A man killed his wife who was sleeping on his chest and then cut her up and ate her. Whites were enraged at the Indians' superior ability to farm and live off the land, and therefore they vilified them even more. Because they could not enslave Natives, they got people from Africa, ripped them away from family, culture, and language, thereby trying to ensure their helplessness. Black slaves were the solution to white cannibals' inability to farm. So these ignorant white cannibals enslaved people, called everyone else savages to justify what they were doing, and then to keep indentured white servants and black slaves from ganging up on them, they initiated systemic racism, giving white servants privileges to divide and conquer. And so it began.

I wrote a paper in college about the arrogance behind Jamestown. One detail that sticks in my mind: thinking that because Virginia was at a similar latitude to the Mediterranean, they would be able to grow palm trees and pineapples. No research, just the assumption that if they willed it so...

And another friend messages me that Zinn was a hero of the left but practiced bad scholarship and made things up. She referenced an article titled "Lies the Debunkers Told Me: How Bad History Books Win Us Over", with the dek: "Politicians quote them. Movie stars revere them. But these authors are so busy spinning good yarns that they don't have time to research the facts." I read the article and notice that it fails to cite any specific historical inaccuracies and debunks nothing. It only says that the book is simplistic and "inspire[s] a degree of passion that verges on the pugnacious." Thereby doing the very thing it is accusing Zinn of—offering facile arguments that make people feel as if they've been hoodwinked and are now in the know.

Ridiculous. People do these things all on their own. We hear anything and, according to our beliefs, we go to extremes of rejection or acceptance, in our need to paint things black or white, good or bad, and therefore ourselves virtuous for being on whatever side we deem "good."

At the start of People's History, Zinn fully discusses the impossibility of anybody writing a history that is objective. A historian chooses what to dwell on. Most histories dwell on the stories told by whomever is victorious. Zinn is choosing to tell the other side. I read on, making up my own mind.

About 60 pages in, I decided to look at some other Goodreads reviews. "Don't read this book!" screams a reviewer with 165 likes. "Eye-opening," say others. Some people idolize Zinn; others declare he is an effete arrogant a-hole and if you like this book, you dislike America.

At the beginning of the book, there is a bit about how historians with biases cherry-pick facts, and the way they insert the ones they disagree with into a basket-load of facts they agree with skews history.

Yes, Zinn does this too. He is a lefty; he believes in the power of the people; he dislikes bullies and murderers and usurpers and a few rich men controlling the masses. All true (and openly acknowledged in chapter 23). But what I value in this book is the story of "the other side." I've heard plenty of the "good pilgrim," noble founders, and broad-stroke tales of how we fought for independence and spent "blood and treasure" (a loathsome euphemism for "murder and land theft") to settle America. What I've never heard is about the in-fighting and factions I see in today's culture, about the strategizing behind suppression and uprising. Can we be so different from the past? No, this book lets us know, it's always been this way.