David and Goliath by Malcolm Gladwell 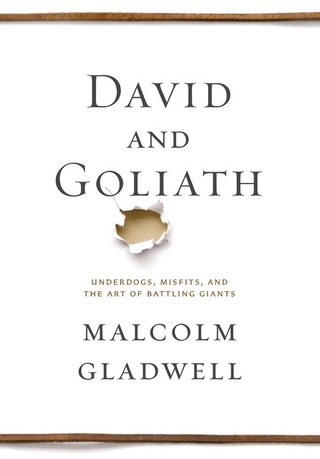 I could not wait to get my hands on a copy of Malcolm Gladwell’s newest book, David and Goliath: Underdogs, Misfits, and the Art of Battling Giants, and I’ve not been disappointed.

David and Goliath is a book of both hope and experiential instruction for everybody who has ever felt like an outsider. Like Gladwell’s other work, it attempts to shatter assumptions and therefore expectations about who will succeed and why. However, taken in a context that includes some of the revelations of Outliers, this new book expands rather than shatters our notions. Because my primary interest is people rather than assumptions about class sizes and more amounts of anything being better than less (there’s plenty of that in this book), I’d like to focus on the outsider people aspect of the book:

Through copious footnotes Gladwell takes pains to clarify that his misfit and underdog success stories are not always the rule: lots of illiterate people with dead parents and lousy childhoods end up in jail rather than lawyering or doctoring.

Outliers illuminated the fact that when highly intelligent children who have been given guidance and nurturing are compared in adulthood to those who were not guided and nurtured, the non-nurtured adults are akin to a different “species.” Where the nurtured children become thriving successful adults, the equally intelligent non-nurtured ones can barely navigate life and live on the edges of society. (And I use “non-nurtured” to include people who were not only neglected but who were hurt and invalidated.)  Read More