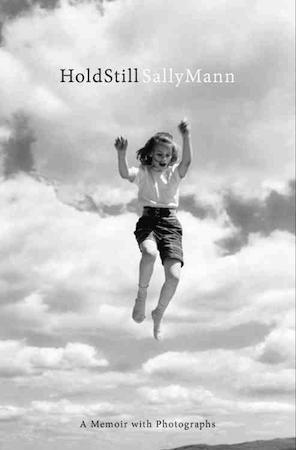 Earthy, fierce, sensual, and elegant—that is the nature of this person, the gorgeous writing, and also, it seems, the nature of the American South, as expressed by photographer Sally Mann in her stunning autobiography. Just like the cover which shows a child “holding still” mid-jump, surrounded by sky, the writing manages to simultaneously move and hold you.

Sally Mann and I are the same age, we occupied the same territory for a time (same class at Bennington), but I don’t recall knowing her. If I did meet her, I’m sure I took one look at the ferocious expression in her eyes—illustrated in some of the many photographs in this book and acknowledged by her—and I would have given her a wide berth. She describes herself as a “feral child.” Funny, because I’ve used the same words to describe myself at that time. But where she was fearless, I was afraid of anything and everything. Where she moved forward with jet propulsion, I free fell. But I think now we would be friends.

She is honest, self-aware, and naked about her personality proclivities:

“. . . I have always been susceptible to some form of opportunistic sorrow—of the deepest, most soul-wrenching, step-off-the-cliff variety.” (203)

In a world filled with people (and media) who move seamlessly from true grief to exaggerated, self-feeding “opportunistic sorrow,” I think this is the first time I’ve ever read it admitted and so well named, and it made me cheer.

To name a feeling “opportunistic” requires so much more energy and emotional muscle than simply accepting it as true and reacting with it—particularly for self-described genetically disposed intense sensitives like Sally Mann. Opportunistic emotions are so seductive and even addictive because they’re fueled by a literal hormonal high. Not only high-drama sorrow, but anger, self-righteousness, and blind fear. And these highs do fuel themselves: the more we react with them, the more furious the flow: A bully name-calls; the target responds in kind. And on and on the snowball of emotions and the consequent dangerous situations expand.*

It takes reflection and willful stillness to interfere with this seductive process; Sally Mann doesn’t claim to have mastered this in her life, but in this book, as the photographer that she is, she insists on waiting, observing, and finally clicking—forcing stillness on an experience in all its ramifications, holding it so we all can see the truth or falseness of one moment. And if it’s a flawed moment, a moment of “opportunistic sorrow,” she eloquently names it. She also addresses the basic falseness of photography itself—how pictures distort reality and rob us of memories based on living in the moment.

But there are so many things like that in this book—things that, when named, make you say, “But of course. I’ve always noticed or felt or known or lived that. But until now, I’ve never seen it in words.”

This autobiography is rich in soul. It is an ode to Mann’s beloved Virginia land and the earth itself. It is an artist’s memoir. It is a deep discussion about race relations. And it is also an investigation: Going through an attic of family records, Mann connects the dots, finds the roots of her attractions and aversions and opportunistic idiosyncrasies in her ancestors. How often I’ve wished I could do something similar, but in my case, everybody is dead and there is no depository of family lore. But reading her story, I imagined doing the same thing and finding maybe one or two people—people I’ve never even heard of—who are just like me: obsessed and aware, motivated and lazy, terrified and fearless, alive and dying. And for some reason that gives me peace—peace that comes from seeing more of the whole picture, more truth. Mann writes:

“I see both the beauty and the dark side of things; the loveliness of cornfields and full sails, but the ruin as well. And I see them at the same time, at once ecstatic at the beauty of things, and chary of that ecstasy. The Japanese have a phrase for this dual perception: mono no aware. It means ‘beauty tinged with sadness,’ for there cannot be any real beauty without the indolic whiff of decay. For me, living is the same thing as dying, and loving is the same thing as losing, and this does not make me a madwoman; I believe it can make me better at living, and better at loving, and just possibly, better at seeing.” (414-415)

Here’s a recent interview Sally Mann and her daughter (pictured in some of the controversial photographs discussed in the book) did with Charlie Rose.

*And here is an unrelated illumination from an ex-CIA agent on a healthy and productive process of listening to your adversary . . . and what you might hear: