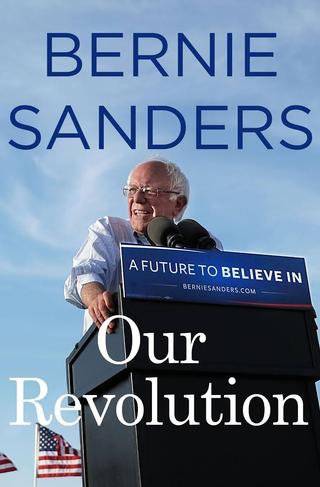 It's been decades since I've faced racial and ethnic hatred up close, but when these things happen, they scar you. Hence, my fear at the proliferation of swastikas following our 2016 presidential election. I don't like feeling this kind of fear, and education helps lower my heart rate as I stay engaged. I read Bernie Sanders's Our Revolution because I needed educating, and if that is your goal, this is the book—whether you are a Bernie true believer, a Clinton supporter, or a Trump voter whose motivation was to take a sledge hammer to a system that is not working and is ignoring millions of people.

The first section of this book is a methodical educational walk through recent politics—absolutely excellent, clear-eyed, and optimistic (particularly the Burlington story which comes near the beginning of the book), no matter who you voted for! If you can ignore your particular biases, you will receive an education in oligarchy, which has been the direction of U.S. politics for a long, long time—whoever has money gets their way.

The political power of the oligarchs goes well beyond their campaign contributions and ability to influence elections. As a result of their ownership of media, think tanks, university chairs, and political front groups, they influence American public opinion and domestic and foreign policy in ways that few realize. (190)

The second section of this book is a manifesto about what exists now and how to create something else for all of us who want fairness, the ability to make a living, safety, and acknowledgement. There is a lot of detail, heavy facts—so much knowledge that I wondered how Sanders can contain it without having his head explode as mine kept threatening to do. But education is not easy. And it can be pretty scary to learn the why and how of oligarchy. At times, I felt panicked and overwhelmed. But I would rather feel those things than not know. There are reasons behind Sanders's campaign talking points about the top 2% owning all the wealth being a bad idea, about why raising the minimum wage is a good thing and how it can be done, and the section on reforming Wall Street is an alarming "Paul Revere"-type equal-opportunity indictment of Democrats and Republicans that left me gasping.

I found myself personally stirred up—remembering times when employers had claimed financial reasons for underpaying me or when people who made three times my income balked at my hourly freelance rate; I recalled a senior colleague, a man with a trust fund, telling me in all seriousness that our pay should be determined by what we need and since he had three homes and two kids, he needed more than I did. When I said I would like to own one home rather than rent and have the option to do things like go to the theater and the doctor, he seemed to think my desire for growth did not equate to his need to support his existing lavish lifestyle—and this is the normal mindset in our country! I learned in Our Revolution that the most common human tendency is to not only grab as much of the pie as you can, but actually believe you need it and it's better if you have it. What an illusion!

I finally got educated about trade; I'd just thought I was stupid and uninformed, but I learned that this may be because the news media have a vested interest in not covering trade agreements.

In short, this book is grad school of substance behind Sanders's familiar talking points. Read in-depth, simple-to-understand discourses on topics you want to know about, or skim and skip some sections once you get the gist—I did this increasingly toward the end of the book, and my one criticism is I wish there were an index and bibliography or endnotes so that I could easily go back to certain topics after writhing on the floor and recovering from the information overload, maybe a year from now.

What makes this book so optimistic is that Sanders has experienced beating the odds. He's seen the people who voted on both sides, and I mean really seen them. They filled his rallies.

"At all of these rallies, where we were filling up large arenas, people were not walking out during a long speech, they were not (I think) bored. They were listening. If there is a lesson I learned from this experience, it was that Americans are hungry for an understanding of what is going on in our country and how we can improve it." (147)

And his section called "Turning Workers into Owners" (pp. 259-262) was completely new and exciting to me. Why don't we do these things? Lots of other places have and they work!

We have our job set out for us, but Sanders and others believe that if we stop sitting it out, if we take our politics personally and become involved, accepting that NOBODY on top, no elected official, is going to "fix" our life, we can change, but it must come from the ground up.

My opinion: It is critical that we stop blaming and acknowledge that we all want the same things: fairness, a chance to succeed in life, a safe home. Sanders has some very good ideas about how to accomplish those things. Number one: Wake up!