Haruki Murakami's KAFKA ON THE SHORE 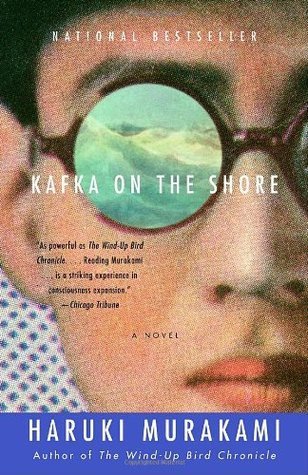 I'm interested in the grotesque—so interested I devoted a whole book, The Last Will & Testament of Zelda McFigg, to a grotesque character. I was impelled to do this because I believe what Zelda embodies—fear, craving to be known, envy, desires that overwhelm her—is what we all, every one of us ego-driven humans, most try to hide. My feeling is that if we can acknowledge these things inside us, even laugh at them—engendering compassion for our human condition—we can grow into the best of us. My epigraphs for the book (and there is a whole page of them) focus on "exile." Why? Because I believe either not knowing these grotesque parts of ourselves or knowing but hating them puts us in a state of exile from who we really are.

An earlier blog on Flannery O'Connor's work gives O'Connor's take on the power of writing the grotesque: ". . . you have to make your vision apparent by shock—to the hard of hearing you shout, and for the almost-blind you draw large and startling figures."

The following review of Haruki Murakami's wonderful book offers a different definition of grotesque—one that makes even more sense to me.

Kafka on the Shore is a tale of quests, a retelling of Oedipus, a story of the looping karmic cycle of life and death, and an utterly unique expression of Haruki Murakami's soul.

Fifteen-year-old runaway Kafka Tamura has a boss named Oshima at his job in a private library. Oshima tells Kafka:

"What you're experiencing now is the motif of many Greek tragedies. Man doesn't choose fate. Fate chooses man. That's the basic worldview of Greek drama. And the sense of tragedy—according to Aristotle—comes, ironically enough, not from the protagonist's weak points but from his good qualities. . . . irony deepens a person, helps them mature. It's the entrance to salvation on a higher plane, to a place where you can find a more universal kind of hope. . . . everything in life is metaphor. People don't usually kill their father and sleep with their mother, right? In other words, we accept irony through a device called metaphor. And through that we grow and become deeper human beings." (199–200)

And later on, after Kafka sees a girl ghost who is a young version of the older woman who runs the library, he asks Oshima if it's possible that a living person can also exist as a ghost. And Oshima tells Kafka of such a story in The Tale of Genji, followed by this explanation:

"The world of the grotesque is the darkness within us. Well before Freud and Jung shined a light on the workings of the subconscious, this correlation between darkness and our subconscious, these two forms of darkness, was obvious to people. It wasn't a metaphor, even. If you trace it back further, it wasn't even a correlation. Until Edison invented the electric light, most of the world was totally covered in darkness. The physical darkness outside and the inner darkness of the soul were mixed together, with no boundary separating the two. They were directly linked." (225)

I think it's wonderful that Kafka on the Shore has found an audience of people who are not necessarily versed in Eastern spiritual traditions, shamanism and indigenous wisdom, or string theory. I marvel at the fact that Murakami seems to communicate to people of all kinds. But for me, his work is a modern-day classical expression of all of the former traditions. The literature of indigenous and Eastern traditions is filled with anecdotes of realized beings who often appear in more than one place simultaneously, helpers who drop into our world from other dimensions, people who lose their souls and retrieve them, others who reincarnate within a lifetime, and explanations about karmic packs of people who incarnate to work things out together. String theory (which I don't pretend to understand scientifically, but whose broad concepts make sense to me) with its multiverses (parallel universes) explains such phenomena, delineating connections that are beyond our normal time-space construct.

Briefly, Kafka on the Shore is the story of two people's instinct-driven pilgrimages (similar to walkabouts). The main characters are a fifteen-year-old run-away boy who names himself Kafka (Crow in Czech), and an old man named Nakata who became dumb (or "hollow") after a bizarre happening that left him in a coma when he was a child. Also playing important roles are Kafka and Nakata's respective helpers, Oshima and Hoshino. Add to that a delightful cast of subsidiary characters including Johnnie Walker (a cat-killer/famous sculptor), Colonel Sanders who talks about time warps and living in three dimensions versus other ways of living, and a magnificent philosopher prostitute whose casual conversation includes her thoughts on consciousness:

"Hegel believed that a person is not merely conscious of self and objects as separate entities, but through the projection of the self via the mediation of the object is volitionally able to gain a deeper understanding of the self. All of which constitutes self-consciousness." (274)

The book is a stunning, romantic construction—a meditation metaphor—weaving the threads of converging, merging, and separating lives from different times and spaces into a fabric of oneness, acceptance, and forgiveness.

Both Kafka and Nakata have a dedication to meticulous personal and housekeeping cleanliness, and this same cleanliness characterizes Murakami's style. His clean, simple sentences both seduce and kind of mesmerize you—perhaps explaining why readers who have none of the aforementioned foundation can enjoy and feel the truth of the book without completely understanding it. The style is so simple, yet through the simplicity, Murakami creates the most complex story about the true nature of existence.

". . . there's a spot they call the Toilet Bowl [says Oshima's surfer brother as he conveys Kafka home after his pilgrimage]. There're these huge whirlpools because it's where the incoming and outgoing tides meet and crash into each other. It goes around and around like when you flush a toilet. If you wipe out there, you get pulled underwater and it's harder to float up again. Depending on the waves you might never make it back to the surface. So there you are, underwater, pounded by the waves and there's nothing you can do. Flailing around's not gonna get you anywhere. You'll just use up your energy. You've never been so scared in your life. But unless you get over that fear you'll never be a real surfer. You have to face death, get to really know it, then overcome it. When you're down in that whirlpool you start thinking about all kinds of things. It's like you get to be friends with death, have a heart-to-heart talk with it." (460)

I don't usually open email notifications but I'm glad I did this time. You are a comfortable, natural writer, and you have an intuitive feel for the subject, Betsy. Maybe you should have a go at your own book -- not derived from own your life experiences, just straight out of your mind & soul.

Hi, Theo. Thanks for the comment. I didn't send an email with an attachment. Weird. But I've had a go at my own books--many times.