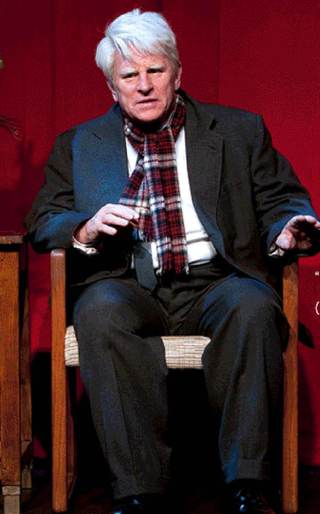 “We dance round in a ring and suppose / But the Secret sits in the middle and knows,” wrote Robert Frost in his poem “The Secret Sits.”

“Let me tell that one again,” spoke actor Gordon Clapp in his mesmerizing performance of A. M. Dolan’s play Robert Frost: This Verse Business, and he told it again. I’m glad, because I needed an instant replay to really hear it. And I needed to see Gordon as Frost a second time; I’d seen the play once before as a workshop. And honestly, I wouldn’t mind seeing and hearing it several more times, because like a great teacher or a great story or a great voice, the “stuff” of this play and performance is simply too rich to absorb in one sitting.

Two years ago I wrote my little book Conversations with Mom: An Aging Baby Boomer, in Need of an Elder, Writes to Her Dead Mother. When you’re young, you imagine that when you get older—or old—you will no longer need elders, mentors, and teachers. Our culture tells you that old people are supposed to be those characters and, as such, nurture the young’uns. Unfortunately, this is not my experience; in my experience, as youthful hubris diminishes, you need elders more than ever. And even though I wrote my little book and gave myself an imagined elder, I still need wise, old rascally men and patient, compassionate, funny women to nurture me as I sometimes float like a lost blob through this thing called life.

I guess I shouldn’t blog my blobness. But it’s how I sometimes feel, and nobody ever tells you that you’ll feel that way at almost-sixty-three, so let me be the first, young'uns: It happens! And when I feel like a blob, I need to hear Robert Frost through Gordon Clapp telling me to calm down; nobody else knows what they're doing either; we’re all just dancing in circles trying to figure things out.

I crave the voices of elders. And when I find them, I listen to them over and over, the way you would listen to great music. Unfortunately I don’t think Gordon would be willing to stand by to repeat his performance in my living room whenever I need it, but I recently found a recording of patient, compassionate, humble, funny writer Eudora Welty delivering her book One Writer’s Beginnings, and I've been listening to her dulcet tone, calming Mississippi accent, and self-effacing brilliance nonstop. “We were all wrapped by the long ride into some cocoon of our own,” she says, describing a car trip to visit her grandparents in the early twentieth century—a time when a move to another part of the country was like disappearing from your family.

In general, “wrapped in a cocoon” is how I feel listening to Eudora Welty’s voice on this long ride; I've collected all of her recorded works because listening to her evokes in me an altered meditative state of bliss. And hearing her on this three-CD recording of her live reading of a memoir with contemplations on writing (Listening, Learning to See, and Finding a Voice) to an audience—well, it's beyond heavenly.

Rascally Robert Frost through Gordon Clapp. Deeply calm Eudora Welty through the magic of CDs. There are a very few writers whose voices reading their own work or whose words through the voice of an actor with the grace to become them takes it to a level of transcendent joy and meditation for the listener. This is he/she. These presentations are that.