Established Writers Don’t Know Who Their Audience Is 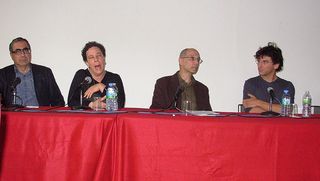 “There’s no such thing as an ideal reader,” said In Treatment head writer and Israeli novelist (Housebroken, Eden, and Accidents) Yael Hedaya during yesterday’s Authors and Audiences panel discussion. The program—part of the PEN World Voices Festival of International Literature—held on the second floor of the beautiful marble lobbied French Embassy on upper Fifth Avenue in New York City, asked five established novelists from four countries to discuss the possible gap between who they envisioned their readers to be and who is actually reading their books. But what became almost immediately apparent was that most of the panel members had no idea who they were writing for.

“I find I write for an anonymous crowd,” continued Hedaya. French novelist Laurence Crossé (The Corner Veil, A Novel Bookstore) said that she just thinks about writing and only recently started to think about who was reading her work. Israeli novelist Asaf Schurr (Amram, Motti) writes for his wife, mother, and grandmother and believes the reader who would understand the work as he does doesn’t exist. Scottish novelist Irvine Welsh (Trainspotting, Ecstasy, Crime: a Novel) doesn’t have much of a concept of an audience, although he believes that if somebody aspires to be an artist, he should think about who is reading his work. Spanish novelist Manuel de Lope (Albertina en el país de los Garamantes, The Wrong Blood) writes for one person or “a faceless monster with one thousand heads.” Who is that one person? Probably his own reflection.

This group admission is particularly interesting in light of today’s publishing climate where new writers must present their work with proposals, clearly stating who their audience is and why people will buy their books.

The second anomaly of the afternoon came when moderator Albert Mobilio (co-editor of Bookforum) asked how the writers’ identity as readers has evolved, along with their experiences as writers. Several of the novelists no longer read fiction! But those who do read it read with a critical eye, reflecting on technique, looking to be inspired or to “steal the secrets” of other writers.

So what’s the take-away for unestablished writers? Once you have sold enough books to be considered marketable, you can be honest and say that you’re writing for yourself. And losing your innocence as a reader goes with the territory.

At last, somebody has said it - you can only really write for yourself when you have established yourself as a writer. To write for oneself is okay, I suppose, but one must publish for an audience, and that audience finds you, not the other way around. And if your book sells well, you really have no idea who's bought it. At the beginning, when sales are slow, you might have an idea, but when sales pick up - how can you translate the figures on a royalties statement into personalities? I can't.