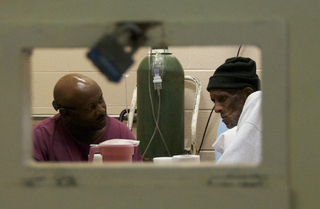 When filmmaker Molly Fowler was at Louisiana State Penitentiary in Angola working on her documentary about inmate hospice workers, one of the inmates wondered how she could see him as a “normal person.” How could she accept him without even knowing the details of the bad things he had done? Didn’t she want to hear his full story?

“No,” said Molly. “I’m only interested in one story—the story of how you go from where you are right now to becoming a hospice worker.”

The result of this this single focus is the remarkable documentary, brilliantly titled Serving Life—a double, or maybe even multiple, entendre that not only describes the life sentences being served by the film’s subjects (murders, rapists, robbers, and kidnappers) who minister, change diapers, and sit vigil as their fellow inmates pass away; but it describes their personality change as they feel the enormity of their responsibility, their love, and their loss; it describes what they offer their fellow human beings; and it becomes a two-word mantra for everyone lucky enough to witness this movie and then resume a life of freedom.

Serving Life, a microcosm of what it is to be a human being in a battle to change, recently aired on the OWN channel as the network’s inaugural original documentary. “I thought maybe if I helped somebody else, maybe that would relieve some of the guilt,” says one inmate, explaining why he volunteered. “Something in you going to open up, or you not human,” says another.

For eighty-six minutes we follow four inmates as they ask to be something more than what they have been for their entire lives. We watch their horror and humility, compassion and heartbreak as they help another human being whose life is draining away; and they do this, aware that they they are seeing their own future—since they all are serving life sentences. These men have charm down to a high science, and they seduce the camera in face-to-face interviews. But we see those manipulations and facades dissolve as they accept another’s—and their own—humanity, frailty, and mortality.

“Do you need anything?” they ask. “What can I do for you?” “How can I help?” Such generosity followed this documentary from nascent idea to manifestation. Molly Fowler was attracted to the subject, based on her experience as a seventeen-year-old prison teacher in Utah. “I’m in,” said writer/producer/director Lisa R. Cohen when she was invited to participate. Molly and Lisa created a trailer, and when Academy Award winner Forest Whitaker saw it, he responded, “How can I help?” and quickly signed on as narrator and executive producer. “How can I help?” asked composer W.G. Snuffy Walden when Molly, a fan of his music, called to tell him about the project.

Serving Life is a clarion call to help, to ask ourselves what we’re doing, and then: “Am I honest enough, am I brave enough to change? Will I shrink into my self-imposed prison of fears, defenses, and reified beliefs? Or will I serve life?

Watch this movie. It is sure to be rebroadcast on the OWN network. To quote the hospice worker, “Something in you going to open up, or you not human.”