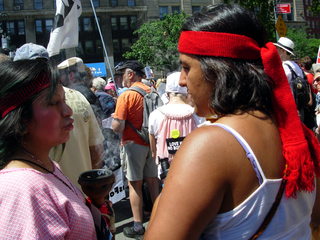 It was the summer 1980 or thereabouts. It's hard to remember, but I know it was hot because I was wearing a soft white cotton dress with shoulder straps. I wasn't that interested in clothes, but when I'd seen this dress, it had beckoned because of its unconstricting beauty and flow, and I needed dresses that I could stand inhabiting for eight mind-numbing hours a day doing temp work in New York City offices. I was headed back to one such office and in a hurry because my hour lunch was almost up.

Madison Avenue and Fifty-second Street or thereabouts. A midtown torrent of people and vehicles. I don't remember if the walk light was green when I stepped off the curb. It might have been. It might not have.

The week before, the light had definitely been green—the green "Walk" sign solidly radiating permission as I stepped off the curb on quiet Central Park West. No cars even stopped at the red light, so I didn't bother to look to my left to see the cyclist hurtling toward me. And when she slammed into me, I was too stunned to do more than gasp, "The light was green!" To her credit, she leapt off the ground and checked that I was unhurt before speeding away.

But on this day—this hot summer day a week later on Madison Avenue—I not only saw but I heard the cyclist coming, screaming at me to get out of the way, and in a kind of frantic flashback of the previous accident, I stepped right into his path as he heroically tried to avoid me.

What happened next is as vivid as right now: Read More

Thank you for this. It helps to be reminded that, whatever our differences, we are all just people.