When Rereading Novels Is Therapeutic 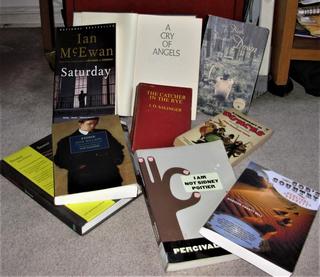 I am a published novelist and a rabid reader, but I've been stalled in both those areas. Between the cultural tumult and my almost-15-year-old dog's terminal kidney disease, I've become a worried political activist and an exhausted canine hospice caregiver.

I have two novels circulating to publishers through my agent (the newest of which deals with what we are going through right now), but since there is no discernable response, I see no point writing more . . . which nicely compliments my complete lack of inspiration.

Between my dog's IV drips and endless treks up and down my four flights of stairs to walk her, I found I cannot concentrate on reading new novels, let alone meeting new characters and remembering who everybody is. So suddenly my reading habit—a great source of joy—stalled.

In these incredibly dark days, I've found solace talking to people I've known since childhood. And, likewise, I realized I need books with a personal foundation already in place—books that I already know are outstanding, that I know will transport me, books that I trust because of my long history with them.

I have such books already on my shelves, but I also bought a couple.

I purchased a new copy of Percival Everett's God's Country from bookshop.org, assuring him a royalty and a local indie bookstore a sale. I bought a used edition of And the Birds Rained Down by Jocelyne Saucier, translated by Rhonda Mullins, from BetterWorldBooks.com whose profits support literacy programs.

On my shelves I have multiple copies of John Williams's Stoner—both the old New York Review of Books paperback and the anniversary hardcover which contains his letters with his agent, expressing a profound yet humble confidence in his work despite the numerous rejections. I have read this book four times and it keeps getting better as I realize ever more deeply the genius of the simple, straight-forward story's construction and the hidden layers of joy in the tragic character of William Stoner.

There is Ian McEwen's Saturday, purchased for my second reading after I was bowled over by a library paperback. Like Stoner, it is a book whose construction and authentic complex characters merit multiple dives.

I've lost count of the times I've read my paperback and my parents' 1951 hardcover of The Catcher in the Rye, and it is beckoning again. In these rough times, there might be something sweet to hanging out with Holden Caulfield.

Likewise, I've lost count of my readings of A Confederacy of Dunces, John Kennedy Toole's brilliant and hilarious novel whose rejections may have contributed to his suicide. How could publishers have ignored this book? How could a writer do something this original and alive and not meet the welcome that would include the Pulitzer he posthumously received?

I've read Percival Everett's I Am Not Sidney Poitier twice already, and along with God's Country, this book expresses the pain under our current exploded boil of systemic racism with a lightness and humor that make it, for me, more devastatingly visceral (and therefore life-changing) than all the anti-racism books I've read. I want to scream Everett's name to the reading hoards and demand that everybody in government read his books.

I recently discovered Jeff Fields's A Cry of Angels (an out-of-print hardcover purchased from BetterWorldBooks, but there is a new University of Georgia Press paperback, if you want to make sure the 82-year-old author gets a royalty), and as with John Kennedy Toole, I marvel that although it was published in 1974, Jeff Fields somehow escaped the fame of John Steinbeck and Wallace Stegner. How can this be? I scream. No doubt, I will read this book again before the end of these dark times.

I live with a dying dog who I love as much as life itself. I will take care of her until she tells me it's time to call it a day. I will cherish every moment we have together. And I will cherish every old book friend sitting vigil on my shelves, waiting to offer me life and sustenance that expands with each new reading.