The Lasting Message of Bartleby, the Scrivener: PARTICIPATE 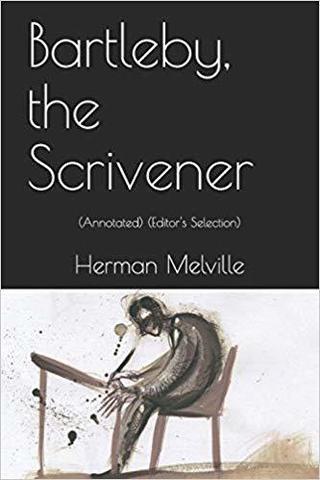 Of my comment that Herman Melville's novella Bartleby, the Scrivener: A Story of Wall Street speaks to today's apathy, an attorney friend wrote:

"I can't agree with your reading. In my view Bartleby is, like Kafka's The Trial or Metamorphosis, a parable about the grinding impact of modernity and its inhumane conformity. Bartleby is the farthest thing from apathetic; he would prefer not to, but he is overwhelmed by the irresistible oppression of being a wage slave, for which there is no escape. Interesting that he is a writer as a trade. Alas Bartleby, alas humanity."

Other people have written that the story's themes are depression and isolation. Originally published in 1853, Bartleby, the Scrivener is told by a first person narrator, a reasonable and almost pathologically tolerant attorney, who hires a clerk named Bartleby whose job it is to copy legal papers. However when it comes to proofing the copies, a tedious task that requires participation of all of the copyists, Bartleby replies, "I would prefer not to." This quickly escalates to his preference not to leave the office—ever, and to do no work whatsoever—all of which the lawyer tries to mitigate by cajoling, begging, bribing, and finally vacating the premises and moving his office . . . only to learn that the new tenant cannot get rid of Bartleby either. In the end, this man who would "prefer not to" is carted away and starves to death in prison because eating does not appeal to him.

I am a writer by trade and a former actor who's spent my life preferring not to do any job that would get in the way of my art. Miraculously I've survived, but it may be due to the fact that although I've been picky about work hours, I've always done the work I've been hired to do, no matter what my private preferences may be. My main currency has been time—time to create. So certainly I understand preferring not to, but reading this story in 2019, in an era when the Naked Orange Emperor won an election where only 58 percent of eligible Americans voted, meaning that 100 million people "preferred not to" vote, according to the Washington Post, honestly made my skin crawl.

The story has been described as a masterpiece, absurdist, and a reflection of the narrator who judges his own life as "safe." Writes the narrator:

"I am a man who, from his youth upwards, has been filled with a profound conviction that the easiest way of life is the best. . . . I am one of those unambitious lawyers who never addresses a jury, or in any way draws down public applause; but in the cool tranquility of a snug retreat, do a snug business among rich men's bonds and mortgages and title-deeds. All who know me consider me an eminently safe man." (2)

And upon learning about Bartleby's demise, along with the rumor that he formerly worked in the Dead Letter Office in Washington—exacerbating his "pallid hopelessness," the story ends with the attorney's famous exclamation:

That sounds to me like crazy liberal pseudo-compassion in any era. The guy would not work. He insisted on living in the office rent-free. He chose to squander his life, to not reciprocate in any way to gestures to help him. And I can't help thinking Bartleby must have something in common with the 100 million people who could not be bothered to vote. And to throw in the towel and exclaim, "Ah, humanity," as if this is our lot—to choose to die—well, that makes me want to punch something.

In my opinion Bartleby is a wake-up call to us now. We can follow his lead and say life is too inconvenient to live. Or we can look at the fact that just as money is merely a form of exchange, and Bartleby chose not to reciprocate in any way or even to take care of himself, so too is voting an exchange, and we can choose to reciprocate for our great fortune of being citizens, we can participate in our governance, or we can feel sorry for ourselves and destroy our democracy by default.

"I don't trust any of them," said a woman in the Midwest on a recent news report. She couldn't see that the present Republican administration was doing anything for the middle class, and Democrats struck her as just as bad.

A good friend of mine will not talk about preferring not to vote. When a mutual friend mentioned to her that I was doing a lot of activist work—demonstrating, making phone calls—she replied, "Oh, it's nice that she keeps busy." If asked about politics, she says, "Oh, I can't be bothered." She sees no relation between her family's dire health concerns, her property value, her clean air and water, and her participation in democracy—just as Bartleby saw no apparent relation between occupying an office and the fact that somebody else paid rent. But those of us who silently excuse this abdication are just as culpable.

In a chapter called "Bad Story #2: The United States Is a Representative Democracy" in Bad Stories: What the Hell Just Happened to Our Country, author Steve Almond writes:

". . . the central reason 90 million Americans didn't exercise their franchise has more to do with psychological and emotional factors [than the electoral college or election rigging problems]. On a fundamental level, people have to believe in the democratic process. That doesn't just require faith in the idea that your vote counts. It requires faith in the larger idea that voting matters, that who we elect at a local and state and federal level makes a difference in our lives. And it is here, at the level of basic disaffection, that American democracy faces its central crisis. (22)"

The first time the passive aggressive scrivener refuses to do what is asked of him, the narrator, his boss, writes:

"I sat awhile in perfect silence, rallying my stunned faculties. Immediately it occurred to me that my ears had deceived me, or Bartleby had entirely misunderstood my meaning. I repeated my request in the clearest tone I could assume; but in quite a clear one came the previous reply, 'I would prefer not to.' . . . I looked at him steadfastly. His face was leanly composed; his gray eye dimly calm. Not a wrinkle of agitation rippled in him. Had there been the least uneasiness, anger, impatience or impertinence in his manner; in other words, had there been anything ordinarily human about him, doubtless I should have violently dismissed him from the premises. . . . I concluded to forget the matter for the present, reserving it for my future leisure. (15-16)"

If people are pleasant and refuse to participate, what are we to do? Despair that their life is so hard or they are so feeble, oppressed, or overwhelmed by the system that we sigh, "What can you do? That's how it is with humanity."? Or should we postpone dealing with it for another unknown future?

There must be another way. I posit that, first, we must see that this lack of participation is aggressive, albeit passive; there is nothing pleasant or neutral about it; neutrality is a disguise. Second, we must not believe we are deceived—that what is happening is not really happening. Third, we must choose not be safe like Bartleby's narrator; we must make a stink: if the passive aggressive people are our friends, we must tell them they are not doing their part, just as we would a coworker who refused to do his job so that all his work fell to us.

Bartleby, the Scrivener enraged me—not because of Bartleby's refusals, but because the boss allowed them for so long and then when the worst case scenario happened, he exclaims "Ah, humanity." And for people now to read this and say poor Bartleby was an unfortunate working stiff, a victim of his culture absolutely kills me.

I have just spent four years writing a novel about our herd nature and dealing with it as a person who prefers to think independently and observe. And my epiphany when I got to the end of my story was that it is not an option to divorce the herd. We can tell ourselves we are independent, but that is a lie. As goes the herd, no matter how we resist, we will go as well.

So no, it is not okay to abdicate one's role and still benefit from the other herd members' efforts—from a rent-free home in Bartleby to roads, clean air, public services, and group negotiations for the greater good in our lives. And Bartleby is a warning to not imagine for one second that saying no and being a "neutral" nonparticipant is possible. After all, even in death, somebody else had to attend to Bartleby's body.