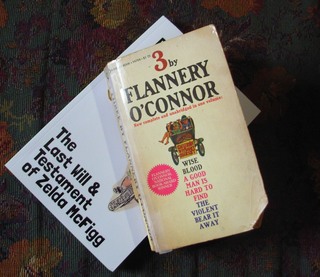 I've had this Signet paperback (pub. 1964) on my bookshelf for decades. I'd read parts of it many years ago, and, in a minute, I'll get to why I recently decided to read the whole book.

The anthology is in three parts: a novel (Wise Blood), a collection of short stories and a novella ("A Good Man Is Hard to Find"), and another novel (The Violent Bear It Away). Since I couldn't remember what I'd previously read, I went from back to front in the hope of sampling the new material first.

Part 3. I was brought up with no religion and in some ways I think that has sensitized me to fundamentalism in many forms—not only religious, but political (including progressive fundamentalism). Fundamentalism is characterized by somebody's absolute certainty that their belief is the only true one and anybody who does not agree is wrong, misguided, an idiot. In The Violent Bear It Away, O'Connor painfully evokes the feeling of being torn to bits by warring sides, of being a confused and helpless angry child without the wherewithal to deal with this level of extremes. O'Connor was Christian and deals with Christian fundamentalism, but the pain transcends the particular story. Reading through all the Scriptural references was a slog for me, since this is not my natural territory, but ultimately I found myself riveted by the basic human drama: a child torn apart by warring adults, and everybody is nuts. I can relate … Unless I completely missed the point and the great-uncle prophet who creates a murdering boy prophet is supposed to be sane. This was the most difficult (unenjoyable) section of the anthology—not easy reading.

Part 2. The short stories and novella ("A Good Man Is Hard to Find") are simultaneously painful, exhausting, and glorious. The writing is exquisite, the normality of rural Southern racism is excruciating, and reading story after story that exposes the worst of humanity is exhausting. One story in a magazine would have been a better way to encounter this work, but I'm glad to have had access to everything in one collection. I feel like O'Connor's student; there are no clichés and every narrative description comes from her idiosyncratic and formidable powers of observation. O'Connor is not a person to copy, but she is a model for finding your own way of observing and reporting on the world.

Part 3. Wise Blood is a Southern-gothic kind of Keystone Kops of insane true believers: Hazel Motes, the protagonist who espouses a Church Without Christ, and his many antagonists. In the opening note to the story, O'Connor describes it as a "comic novel about a Christian malgré lui." She confirms that one must understand that "belief in Christ is to some a matter of life and death" and that Hazel Motes, an obsessed prophet who murders people, has an integrity that "lies in his not being able to" deny the Christ that his preaching denies. Yes, the novel is sometimes comic, but the story ends so darkly that I think it could only be perceived as positive by a Christian whose belief in Jesus's divinity is so important that it invalidates the value of life, compassion, and mortal kindness.

I decided to read and reread this anthology now because I believe Flannery O'Connor's work sets a precedent for my own. When I was looking for writers to blurb my novel The Last Will & Testament of Zelda McFigg, I found that there really were no current female writers writing comic and grotesque characters. (Please correct me if I'm wrong; I'd appreciate knowing of any.) If O'Connor were still alive, I'd have begged her for a blurb, but instead I've quoted her sage explanation about why she wrote what she wrote. In The Fiction Writer and His Country, O'Connor says:

The novelist with Christian concerns will find in modern life distortions which are repugnant to him, and his problem will be to make these appear as distortions to an audience which is used to seeing them as natural; and he may well be forced to take ever more violent means to get his vision across to this hostile audience. When you can assume that your audience holds the same beliefs you do, you can relax a little and use more normal means of talking to it; when you have to assume that it does not, then you have to make your vision apparent by shock—to the hard of hearing you shout, and for the almost-blind you draw large and startling figures.

I would never define myself as a Christian (or any other religion), but I feel that my protagonist Zelda McFigg’s perhaps grotesque character is my attempt to shout about (and learn from) the deeper concerns in this novel: the insanity of some of the distortions of our American Dream—a zero-sum culture where you’re either right or wrong, good or bad, etc., and dependent on those dualities, you win or lose. In my opinion, the antidote is the sane vision of nonduality (that we are simultaneously right and wrong, good and bad), or compassion—which can hold the fact that we—all of us—are both love and hate; one does not wipe out the other. And it's the compassion for our human condition that makes the whole thing bearable.

But that leads to my problem with O'Connor's work. Yes, it is sometimes humorous, but pain and oblivious cruelty rule, the characters learn nothing from it, and she leaves us with such bleakness (not quite as bad as what I've privately labeled the "Bleak School of Literary Book Writing"), that I often found myself confounded by the point of it all. It's an odd thing to both admire and dread a writer's work. So there I am again, in that awkward but true nonduality of opposites.